Flying a large commercial jetliner? There is an app for that

United Airlines has annouced it is replacing the hefty flight manuals and chart books its pilots have long used with 11,000 iPads carrying the same data.

The iPads will be pre-installed with the Mobile FliteDeck software app from Jeppesen, a Boeing subsidiary which provides navigation tools for air, sea and land.  And on long international flights the pilots could also practice their landings by playing Firemint's Flight Control. 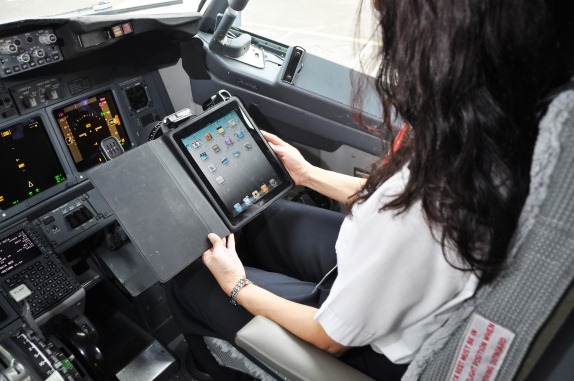 "The introduction of iPads ensures our pilots have essential and real-time information at their fingertips at all times throughout the flight."
iPads will be supplied to all pilots on United and Continental flights; the two carriers merged in 2010.
United is the second major US carrier to adopt the iPad as a key pilot flight aid.
In May Alaska Airlines also adopted it, after the Federal Aviation Administration okayed the iPad for cockpit use.
United estimates that using the iPad will save 16 million sheets of paper a year, and that the lighter load it represents will save 326,000 gallons (1.2 million liters) in fuel.
"With iPad, pilots are able to quickly and efficiently access reference material without having to thumb through thousands of sheets of paper and reduce clutter on the flight deck," the company said.
Contact NYC Web Design today for a free quote on your iPad app.