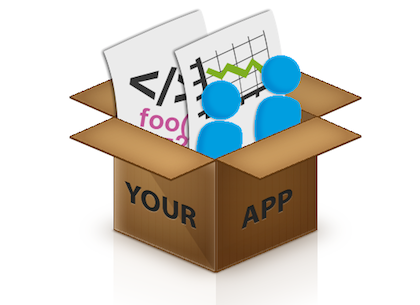 By the end of 2013, mobile app users will download approximately 70 billion mobile apps, according to statistics. That's around 20 billion more downloads compared to 2012. That's awesome news for those who sell both free and paid apps. To break those numbers down even further, that's 50% Android downloads and 41% iPhone app downloads.
This is also good news for small business owners and corporations who are considering having a mobile app developed. If you’re considering hiring a mobile app developer to build a new app, here are a few places to sell your app once it’s built.

When you sell your Android app on Google Play, you're selling to more than 130 countries. Google Play offers users an easy way to pay and download your apps. Users can instantly download your app from their mobile device or PC.
They also offer easy payment options, such as: gift cards, credit cards, Direct Carrier Billing, and Google Play balance.

A lot of people aren't aware that you can sell your Apps on Amazon. It is a very underrated alternative. With ‘Mobile App Distribution Amazon’, you can to sell apps on Kindle Fire and on the Amazon platform. Selling on Amazon offers a host of benefits. You can use the Amazon In-App Purchasing API to offer your customers subscriptions for purchase within their apps on Kindle Fire. You can also sell through international distribution.

Blackberry offers a variety of distribution outlets, such as: GetJar, Handango, and Handmark. Blackberry's mobile app distribution channels helps in getting your app exposed to millions of app users. These three outlets gives you access to millions of app users.
Need a Mobile App Developer?
For an estimate on our mobile development services, contact us and we will  schedule a consultation with our mobile app developer.