Back in 2008 we signed up for a dedicated server from Hosting.com (formerly HostMySite.com) for one of our clients.  Our salesperson was very helpful and explained to us that there was a 12-month term on our dedicated server.  I remember thinking to myself we will have this for much more than one year, and it wasn't a problem.
Fast forward to over five years later.  We still have the server but it has been giving us issues. It has become very slow and we have had to restart it many times.  We filed support tickets with Hosting.com but they were unable to determine the issue.  We felt these were warning signs that we should probably decommission it soon and move our valuable files over to a new server to ensure reliability.
We placed a call into Hosting.com's dedicated server engineers to decommission that server and put a stop on the recurring billing.  We were paying $617/month for an obsolete Windows 2003 Server but we did so gladly knowing that we would eventually be changing it and we needed it to be online for our clients.  We performed the lengthy migration and then our server was shut down by their technicians.  A couple of weeks later I went to follow up to make sure the recurring billing has stopped for that account.  The tech said nobody looked at the issue in the billing department and I was advised they would get on top of it.  Another week goes by (now three weeks since our server has been shut down) and their billing department advises that we owe them $5,373.90 in an early termination fee.  In disbelief I looked at the contract I had signed five years ago and I noticed that the term was 12 months as I had suspected.  They directed me to some fine print many pages down in legalese that contradicted the term set forth on the main page.
Here is the term: 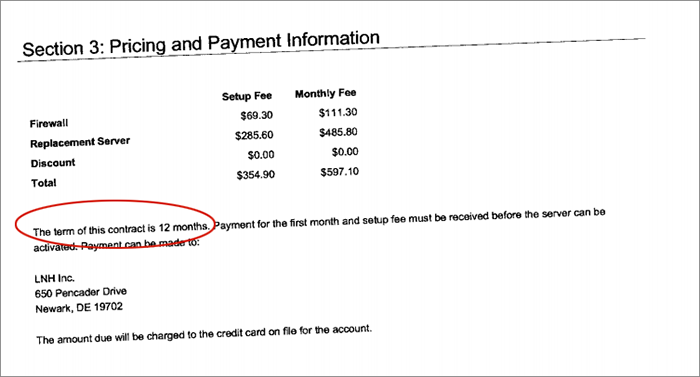 I was advised that many pages down in fine-print, there is a sentence that says 12 months actually wasn't the term of this contract. It's actually the "Initial Term" and the 12 month term renews from year to year indefinitely.  If I even wanted to cancel, I had to give them 2 months notice before the term ends or before any recurring term was up or they'd charge me the balance of that term remaining plus the whole next 12 month term… Pretty wild huh?

I was advised we still owed their company $5,373.90 due to early termination on my 12-month contract even though we have had this server for 70+ months and paying more than $46,000 in hosting fees on this one contract alone.

Fact: I was told by our salesperson that the term of the contract was 12 months.
Fact: The contract corroborates that on page 4 and states the contract is 12 months.
Fact: There is fine print buried many pages down that is very confusing and states that the term is in fact NOT 12 months, but that term set forth on page 4 is only the "initial term".
Hosting.com tried to negotiate the early termination fee with me even down to 50%. But after already paying more than $46,000 for a server, giving them 7 years of business, and forwarding many of our clients to them providing them hundreds of thousands in revenue, I am not interested in giving them a dollar more to be honest.
I then got a letter that all inquires should be dealt by their attorney.  I explained kindly to a manager there that if they will follow up with this deceitful termination fee I will shut down my 10 other servers I have with them through various accounts and customers costing them nearly $10,000 per month in lost revenue.  I also advised I would blog about the unfortunate situation perhaps having other potential customers read my story and maybe cost them countless dollars in revenue.  They did not seem to be concerned at all about the lost business and bad publicity all for $2,500 which they wanted to meet me halfway on.
Oh well, there's only so much I can do.
So in the future, I would stay far away from Hosting.com and/or HostMySite. There are many other cheaper companies like Rackspace and Amazon Web Services.  The latter is the best in my opinion and you can spin up and shut down servers whenever you want at the cost of pennies.  What's more is there are no deceitful contracts to sign.  I guess when you are losing tons of business to the likes of Amazon which provides better, cheaper and more reliable services, you have to put confusing fine print in your contracts to trick people into giving you more business rather than wilfully.
It was fun while it lasted.  I guess I'll have my hands full the next few weeks moving all my clients over to Amazon Web Services.